Who was the bird brain who produced this news promo at WOAI in San Antonio? And how could anchor Elsa Ramon play along?

I usually don’t inject opinions on this site, but this is so unbelievably stupid, I just couldn’t help it.

When journalist Laura Martínez wrote about it on her blog and led me to the video, I couldn’t believe it.

Someone at San Antonio NBC affiliate WOAI, channel 4, evidently thought dressing up its anchors and having them do a little role-playing with exaggerated moves, pretending to be characters of a telenovela would be a cool promo to attract more Latino audiences to their 6:30 pm newscast. Or, is it possible that they thought it would attract other viewers by making fun of TV programs many Latinos like to watch?

Either way, it’s a lose-lose proposition.

What’s even worse, anchor Elsa Ramon went along with the gag.

Take a look and please share what you think! 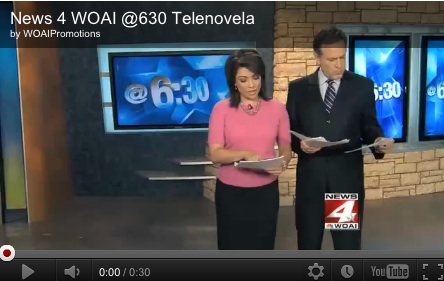