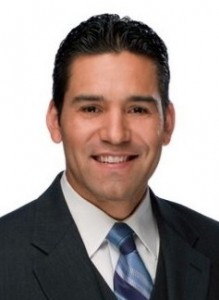 Rolando Nichols is KWHY-22’s new Vice President of Production and News, as well as the station’s 7 and 10 pm anchor.

Rolando took over the news department last week. He has stepped down as CEO of Centro TV and Radio media production house and resigned as the Spanish voice of the Angels to focus on his new role.

“I’m super excited,” Rolando tells me. “It’s a great challenge. This job is the next step up in my career as a journalist and as an executive.”

Asked about any more talent changes, Rolando says: “There will be no major changes regards to talent, but I am looking at demo reels. I’m always looking at ways of improving the product, with better graphics, more news coverage of our community and strengthening our presence in the city.”

Rolando previously worked as a Univision anchor/reporter for 11 years in Phoenix and Los Angeles.