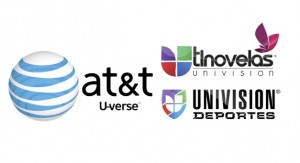 Univision’s new networks – Univision Deportes and Univision tlnovelas will no longer be exclusive to DishTV.  They’ll will also be available on ATT U-verse.

Univision today announced it signed a multi-platform content agreement to deliver its content – including the new cable networks –  across all of  AT&T’s platforms, including U-verse TV, online, smartphones and tablets.

Univision Deportes and Univision tlnovelas will launch in the coming weeks and FOROtv, a 24 hour Spanish news network produced in Mexico, will launch later this year on AT&T U-verse.

Univision launched Univision tlnovelas in March.  It debuted Univision Deportes network on April 7.  Initially, carriage of both networks was only secured on DishLATINO.

Univision Deportes Senior VP of Productions David Neal told Media Moves shortly after the sports network debuted that the distribution team was in talks with “numerous potential partners” and new deals would be announced “in the near term.”