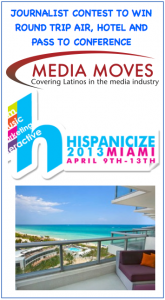 Earlier this week, Media Moves teamed up with Hispanicize founder Manny Ruiz to create a contest for journalists interested in the ever-growing opportunities in the digital media space.

The winner will receive a round trip ticket to Miami, a two-night hotel stay and a free registration to attend the Hispanicize 2013 conference in Miami, which takes place April 9-13.

We’ve extended the deadline for entries one more day to March 20. The winner will be announced on March 21.

Due to several responses indicating that many journalists don’t have their own blogs, we’ve updated one of the contest rules, making it easier for more working journalists to participate.

To be eligible to win you must:

The prize is non-transferable and cannot be exchanged for money.