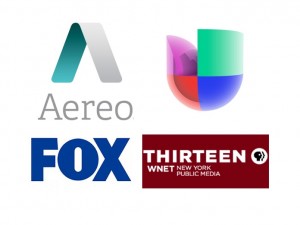 A group of television broadcasters is appealing the U.S. Court of Appeals for the Second Circuit’s ruling that startup company Aereo wasn’t infringing any copyrights.

Univision, Fox and PBS have filed a petition for an “en banc” review of the Aereo case.  They argue that Aereo is a subscription retransmission service that allows paid subscribers the ability to see over-the-air copyrighted programming on an internet-enabled device and that it’s operating without a copyright license.

In the document, filed on Monday, the plaintiffs state the court’s ruling should be reconsidered based on the Copyright Act of 1976:

“One of the express purposes of the Copyright Act in 1976 was to establish that any service engaged in retransmission of copyrighted television programming to the public is ‘publicly performing’ the programming and therefore must pay copyright royalties.”

The broadcasters affirm that “unless reversed, that decision will wreak commercial havoc.”

Last week Fox and Univision executives threatened to pull their networks’ signals off the air and move them over to cable if the legal system doesn’t force Aereo and other similar live streaming services to pay the network to broadcast its signal.

At issue are the more than $2 billion in retransmission fees the networks generate in revenue from subscribers.

The broadcasters say they their business model can longer depend strictly from ad revenues, and that retransmission fees are fundamental for their survival.

Other Hollywood players have also come in support of the broadcasters against Aereo.  Paramount Pictures, Warner Bros., MGM, the Directors Guild of America, and the Screen Actors Guild are among those who teamed up to file an amicus brief in support of the “en banc” review of the Aereo case.

They argue that as performers, creators and distributors, they need to be copyright protected:

“The right is especially important, and will only become more important, asmovies and television shows increasingly are disseminated and viewedthrough internet streams to the public.”

During yesterday’s paidContent Live conference in New York, Kanojia said he’s creating “an experience that’s better for the consumer” at a fraction of the price of a cable subscription.

While his company plans to “experiment” with program offerings, Kanojia says they’ll be providing “news for sure.”

Kanojia predicts that by 2015 broadband capacity will have increased enough that the average household won’t see a need for a cable subscription.