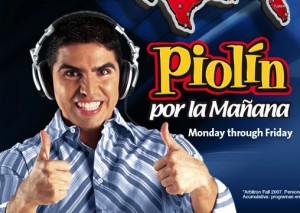 Alberto “Beto” Cortez, a writer, producer and performer on the radio program, alleges that “Piolín” was “physically, sexually and emotionally harassing” him over a 3-year period ending last January. Cortez claims his boss repeatedly made aggressive and unwanted sexual advances, including grabbing his buttocks and genitals, taunting him during staff meetings, calling him by a derogatory term for a homosexual, and asking vulgar questions about Cortez’s girlfriend.

According to documents obtained by the Los Angeles Times, Cortez’s attorney Robert R. Clayton made the claim in an April 16 letter to Roberto Llamas, EVP, Chief Human Resources Officer of Univision Communications and Jose Valle, President of Univision Radio.

In addition to the sexual harassment claim, Cortez alleges that “Piolín” ordered members of his radio production team to falsify letters supporting a high-profile campaign for congressional immigration reform.  “Piolín” very actively promoted and championed the issue on his show.

“Piolín’s” attorney, Jeffrey Spitz, says the allegations are false and motivated by money.

“A disgruntled, troubled employee has made malicious and false claims about Eddie Sotelo…This was done as part of a demand for money…. The employee worked with Eddie for more than a decade. The employee’s allegations of harassment and falsification of immigration letters are pure fiction intended to gain a financial settlement,” Spitz said in a statement to the LAT.

In the letter sent to the Univision execs, Cortez’s attorney states he spoke to other former employees who witnessed “much of the harassment described” and that others were also “subjected to or heard of Sotelo’s misconduct, threats, and the retaliation he has taken against employees who have spoken out against him.”

“Because Sotelo was the cash-cow at Univision (rated number one in multiple markets and with the highest ad revenues), Univision turned a blind eye to Sotelo’s inappropriate and unlawful conduct. In doing so, Univision violated the company’s own written employment policies.”