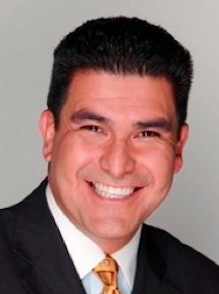 Israel Balderas has been hired as a weekend anchor/reporter for WPEC-TV, CBS 12 in West Palm Beach. He officially started the new job on Monday, but his first day on the air will be this Thursday, Nov. 7.

Israel will be anchoring the weekends and reporting 3 days a week.

He starts the new job after a 5 month break from TV. In May, he parted ways with then WCCB-27 FOX Charlotte, now a CW affiliate since July 1.

“We’re thrilled to be in West Palm Beach for many reasons, including the fact that family lives in the area,” says Israel.

Before the Fox gig in Charlotte, Israel was in Washington, D.C. where he spent a little less than a year covering politics, penning columns and op-eds. He was previously morning anchor/reporter for KFOX in El Paso, where he’s originally from.

He went back to school and earned his law degree in 2006 and briefly worked as a media advisor for the FCC and for a law firm, before returning to his TV news career. working as a producer for Fox News Channel before getting the anchor gig in El Paso.