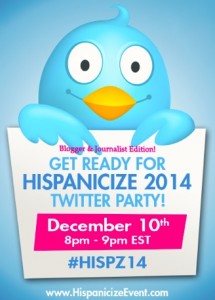 Hispanicize 2014 will be held April 1-4 in Miami.  The event, which started first as a marketing/PR conference has evolved since its inception, including music, film and social media.  This year, the conference added a journalism track, which will again be featured in the 2014 event.

With only just 4 months until the conference that founder Manny Ruiz hopes to turn into the “Latino South by Southwest” (SXSW), he’s organizing a Hispanicize Twitter party to share details and answer questions of what to expect next year.

Media Moves will be co-hosting the special edition Twitter party on Tuesday, December 10 from 8 to 9 p.m. EST.  The Twitter party hashtag will be #Hispz14.

Journalists and bloggers are invited to participate to get a preview of the sessions they can expect to see at Hispanicize 2014, as well as share ideas of what they would find useful.

Media entrepreneurship is scheduled to be a main focus of the entire event.

Roundtrip airfare and a free pass to attend Hispanicize 2014 will be among several prizes given away during the Journalist and Blogger Only Twitter party on Dec. 10.