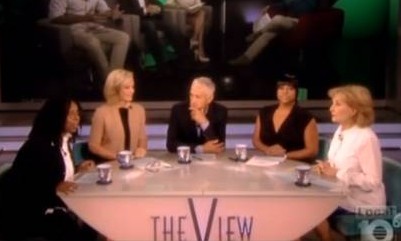 In a move that shows some synergy between ABC and Univision, both joint venture partners of the recently launched Fusion network, Jorge Ramos co-hosted “The View” on Monday.

The guest co-host went on the show to promote his English-language newsmagazine “AMERICA with Jorge Ramos.”  His show on Fusion, recently reduced to a once a week timeslot, moved to Tuesdays at 10:00 p.m. starting today.

During the banter with the steady all-female roundtable, Jorge talked about his family and his relationship with girlfriend Chiquinquirá Delgado, who hosts “Mira Quien Baila.”

The question remains:  when will we see a full time Latina co-host on this show?

You can watch a brief clip here: