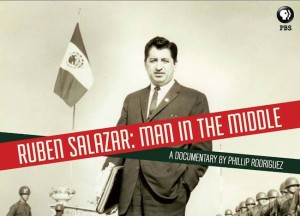 The 60 minute documentary examines the life and death of  journalist Rubén Salazar, an L.A. Times columnist and News Director at KMEX-34, killed in 1970 when he was struck in the head by a tear-gas projectile during a protest.

The circumstances surrounding his death were considered suspicious by many, prompting numerous conspiracy theories.  Forty years after his death, the L.A. Sheriff’s files on the investigation of Salazar’s death were finally unsealed.  An independent review determined his death was accidental.

The film, produced and directed by Phillip Rodriguez, includes interviews with Salazar’s friends, colleagues and family members, and Salazar’s own words culled from personal writings. It also features material from recently released files.