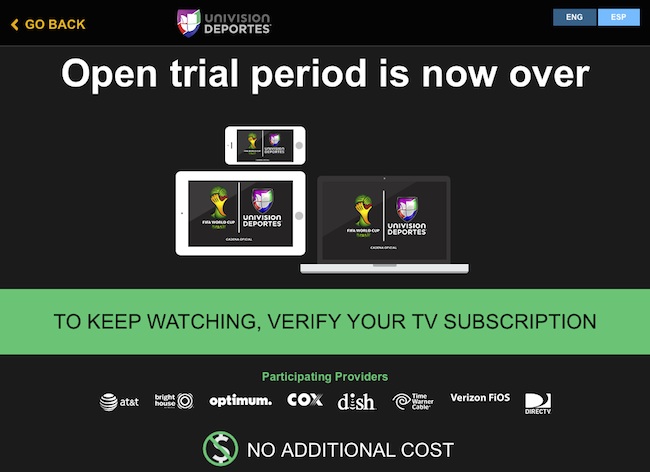 Starting July 4, the network is pulling the plug on free and easy streaming of the games online or via mobile app and moving the digital feeds of the last 8 matches behind a pay-wall.

Univision has seen record digital usage during the World Cup. The company says video streaming of the first round of games was “an open trial period.” That’s the message app users will see when they try to watch a game online or their mobile device.

In what seems like an effort to strong-arm Comcast, which doesn’t carry the Univision Deportes Network (UDN) cable channel, users who want to video stream the games have to be subscribed to a provider that does.

Univision states there is no additional cost to watch online, but if the users aren’t subscribed to any cable provider, they’re out of luck.

“The objective was to encourage sampling of the Univision Deportes app, build an audience, then educate that audience on the benefits of TV Everywhere via a robust marketing/education campaign,” Univision spokeswoman Mónica Talán told AdWeek.

Users will now have to sign in with their pay TV credentials if they want to catch any more World Cup action via digital stream.

On its website, Comcast points out that customers can watch the games broadcast live on Univision and can live-stream the final 8 games in English or Portuguese (ESPN Deportes has been broadcasting the games with Portuguese narration in the U.S.) through WatchESPN and the Xfinity TV Go website and apps.