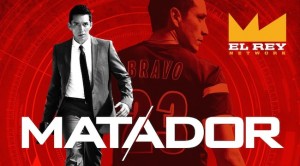 El “Matador” has been killed. Although El Rey announced a second season pick up just before its July 15 debut, the network announced it won’t be moving forward with a second season of its original action series.

The first season, which consisted of 13 episodes, ended its run in October.

“Matador,” created by Bob Orci and Alex Kurtzman, was an expensive production shot in Los Angeles that starred Gabriel Luna as a CIA operative posing as a professional soccer player and Alfred Molina as the billionaire owner of the soccer team.

About the cancellation, the network said in a statement:

“Ultimately it was a business decision but to be clear, we were very proud of the series on every level-creatively it hit the mark and we are gratified that it celebrated diversity in front of the cameras and behind the scenes. We want to thank everyone involved, from the extraordinarily talented cast and crew to the amazing production team. We appreciate all that they have done and look forward to the opportunity to work with them in the future.”