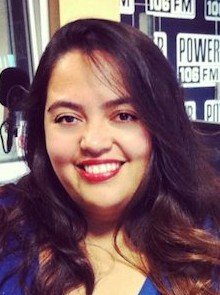 She’ll be reporting directly to Andy Carvin, who heads the global news site scheduled to launch in January.

“Andy and the team have full editorial control, we are going to experiment, see what works, what sticks and hopefully, also receive feedback from community,” Wendy tells Media Moves.

“I’m very excited to be part of such a groundbreaking new venture in which we are no longer explaining why social matters – we know it does. We’re going to use these platforms to share news content and create a way in which people can participate in the conversation.”

In addition to her new role, Wendy will continue her duties as host and executive producer of “Knowledge is Power” on KPWR 106 FM in Los Angeles, as she has done for the past 8 years.

A multimedia journalist, Wendy most recently worked as a writer and digital producer for NuvoTV. She is also a regular contributor to Pivot’s Take Part Live, Huff Post Live, The Young Turks’ The Point and Al Jazeera America.

On its website, parent company First Look Media states it seeks to improve society through journalism and technology and “is deeply committed to editorial independence,” structuring its network of digital magazines “to provide our journalists with the kind of autonomy that is too often undermined by the demands of advertisers and investors.”