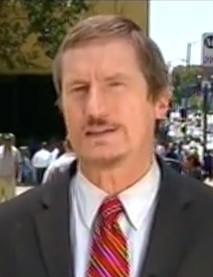 Telemundo news correspondent Carlos Botifoll is leaving the network after a 22-year run based out of the Los Angeles bureau.

“I have been in the same job, same bureau, doing the same thing for 22 years. Even though I’ve done things that interest me, I felt it was time for a change, to try something new,” Carlos tells Media Moves.

Carlos says he had been considering the move for the past two years, since the birth of his son.

“When my son was born, my priorities changed. I want to spend more time with him and my job keeps me on call 24/7,” he says. “I had been in discussions to move to a new role within the network for the past year and half, but nothing panned out, so I decided to leave.”

Carlos says his negotiated departure will allow him to take time off to focus on his family and planning his next move.

“Let’s just say I’m in a transitional phase in my career. I’ve been a reporter for 34 years with only two networks. I’ve never done anything else. Now is the time to do something new.”

About Carlos’ departure, a Telemundo network spokesperson says “He was an integral part of Noticias Telemundo and we wish him the very best in his future endeavors.”

Carlos began his on-air television career as a correspondent for SIN (Spanish International network), which later became Univision. Among his many roles within the network, he was a weekend anchor/reporter at channel 23 in Miami in the early 80’s, and worked as a correspondent in New York, Washington, D.C., Central America and London.

He switched networks to help Telemundo launch a national newscast in 1987, but went back to Univision.

Carlos returned to Telemundo as an L.A.-based correspondent in 1993, where he has remained until his decision to leave the network.