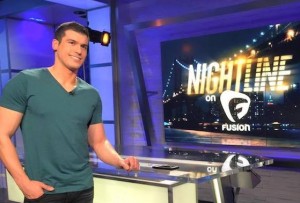 Starting next week, Fusion, the Univision/ABC joint venture cable network, will debut its own edition of “Nightline.”

Hosted by ABC’s Gio Benitez and Fusion’s Kimberly Brooks, the first “Nightline on Fusion,” will air on Wednesday, February 18 at 8 pm ET.

The one-hour show will include re-purposed stories from the ABC late-night program geared to millenials.

Gio, a correspondent for ABC News, is an award-winning reporter who made a name for himself early in his career by becoming the first reporter to ever shoot a television story entirely with an iPhone. Prior to joining ABC, Gio was a reporter for WFOR, the CBS owned-and-operated TV station in Miami.

Kimberly is a reporter and producer for Fusion, who has worked as a producer for The Oprah Winfrey Show, NBC and ABC News.