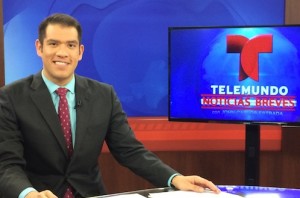 The news briefs are produced by the Raycom-owned KTRE, the ABC affiliate in Lufkin, TX, which airs Telemundo on its digital subchannel 9.2.

John-Carlos Estrada, the anchor and managing editor of KTRE’s 6 and 10 pm newscasts since October 2014, will be in charge of producing and anchoring the Spanish-language news briefs, which will air on Telemundo Monday – Friday at 8pm station and four times throughout the night and early next morning.

“I’m so proud of the Raycom Media leadership and my news director for allowing me to launch this initiative in East TX,” John Carlos tells Media Moves. “There’s a large Hispanic population in East Texas that needs news delivered to them….These Spanish-language news briefs have also created a bilingual MMJ position at KTRE. The new MMJ will fill-in as the Spanish producer and anchor when I’m on vacation.”