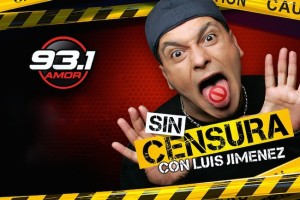 Former Univision radio DJ Luis Jiménez is back on the air – and on SBS – starting this morning. SBS has again hired the popular DJ as morning show host at its flagship station in New York, 93.1 FM.

“Sin Censura con Luis Jiménez” will air weekdays from 6 to 10 am.

Carolina Cadillo, his co-host on Univision radio, will also come on board his new show.

Luis has been off the air since July of last year, when Univision abruptly canceled the “The Luis Jiménez Show,” which was broadcast on WXNY 96.3 FM since 2008.

Before moving to Univision Radio, Luis spent 14 years as morning show host at La Mega 97.9 in New York. His show “El Vacilón de la Mañana,” which debuted August 9, 1993, became the #1 rated show in the NY market regardless of language in 2004.