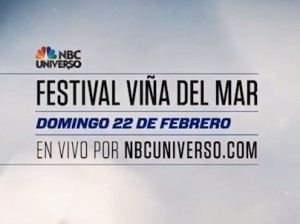 The recently rebranded network will offer more than 34 hours of live coverage and television specials in the U.S. exclusively through NBC UNIVERSO’s multiple platforms: on TV, PCs, tablets/mobile devices and On Demand.

NBC UNIVERSO will kick off its six-day live stream of the music festival beginning Sunday, February 22.

The network’s subscribers can also catch up on the full concerts at any time for up to 10 days after premiere via the NBC UNIVERSO NOW mobile app, as well as Video on Demand and TV Everywhere by entering the subscriber’s log-in information.