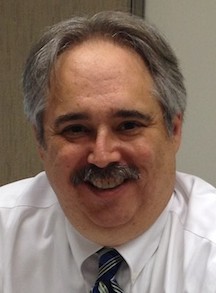 Just months after being laid off from the San Antonio Express-News, Dino Chiecchi has landed a new job in his hometown.

Dino is now Managing Editor for presentation and website for the El Paso Times.

“I’m thrilled at returning to my hometown newspaper as one of two managing editors,” Dino tells Media Moves. “I went to high school here, college and started my career here.

It’s an honor to come back to the city I left 30 years ago to pursue my career at several media outlets, including 23 years at the San Antonio Express-News, five years at the Associated Press and even a short tour of duty in Hong Kong.”

His first day on the job was Monday, April 13. He oversees the team that produces six New Mexico papers and the Times for parent company Digital First Media. He’ll also oversee production of the Times’ website.

Dino spent the last 10 years at the Express-News. First, as Editor of Hispanic Publications, overseeing Conexión, the Express-News’ weekly bilingual publication, most recently adding the role of Administrative Editor for the paper.

He previously worked for the San Antonio paper from 1986 to 1999. He worked as a Supervisor/Desk Editor between his Express-News gigs.

Dino started his journalism career as a reporter for the El Paso Herald-Post, and moved to the Austin American-Statesman before doing a brief stint at the South China Morning Post.