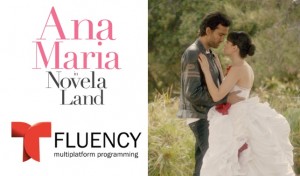 Fluency, a division of NBCU Hispanic Enterprises and Content, is debuting its second film in a year.

“Ana Maria in Novela Land,” produced by the two-year old Fluency multi-platform production studios, will air this Saturday, May 2 at 8pm ET/PT on the Oxygen network.

Oxygen partnered with Fluency for the television release of the romantic comedy. It was directed by Georgina García Riedel, who co-wrote the screenplay with José Márquez, Telemundo’s VP of Digital Video Production & Development.

The bilingual film is the story of a woman’s struggle to find herself after being yanked out of her favorite telenovela.