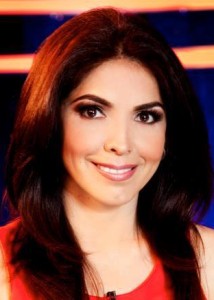 Mirthala Salinas, weeknight anchor at Estrella TV’s KRCA-62, has left the company. She says she wants to spend more time with her family.

Her last day on the air was Friday, but she announced her departure on social media with the following message:

“I’m not one for good-byes and that’s why I didn’t do it on the air. Friday was my last day at Estrella TV. It was a difficult decision, yet the best. I need to dedicate more time to my children. I thank you for all your support. I met fine people at Estrella TV…. Mr. Liberman, thanks for everything.” (post embedded below)

She previously spent 3 years at W Radio AM, where she hosted a morning show and anchored “Minuto 60”, a syndicated radio newscast.

Mirthala was an anchor/reporter at KVEA-52 from 1997 to 2007. She was ousted from Telemundo Los Angeles’ flagship station after being caught up in a romantic scandal with mayor Antonio Villaraigosa.

Before that, she was an anchor/reporter at KTVW-33 Univision Phoenix.