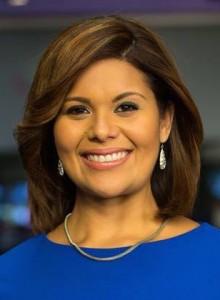 Sarykarmen Rivera has been officially named news anchor at WVEA-62 in Tampa. She had been filling in on an interim basis since mid February, when Natalie Pérez left the station to join the Univision Chicago.

Sarykarmen will be anchoring the 6 pm newscast Monday through Friday alongside José Rivera Adrovet.

Her promotion comes a year after she returned to the Entravision-owned Univision affiliate as a reporter.

WVEA-62 is the station where the Puerto Rican native started her broadcast career in 2002 – first as an intern, and two years later as an assignment desk editor for Noticias Tampa Bay. Months later, she became a general assignment reporter.

Station management surprised her with her promotion on-air yesterday, April 1, with a video montage.

Prior to her return to WVEA in March of 2014, she anchored the morning news at the short-lived CNN Latino Tampa (now MIRA TV Tampa).

She was previously anchor of the 5 and 10 local newscasts at Telemundo Austin and reported at their sister station KEYE TV, a CBS affiliate. Before that, she was a reporter for Telemundo Orlando and Bright House’s 24 hour Spanish language news News 13 en Español (now Infomás).