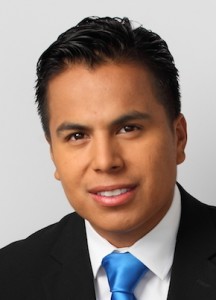 His official start date is June 1, but he’ll begin on air the following week.

Jorge Enrique arrives to Chicago from KVDA Telemundo 60 San Antonio, where he has been a general assignment reporter for Noticias 60 Telemundo on weekdays at 5 pm and an anchor for the daily newscast at 10 pm.

He previously worked as a Multimedia Journalist, Reporter, Producer and Technical Director for Entravision Communications in Las Vegas and Reno from September 2011 to September 2013.

His past experience includes jobs as Chief of Master Control for Univision Arizona and talent/producer for Radio Campesina Network in Phoenix.