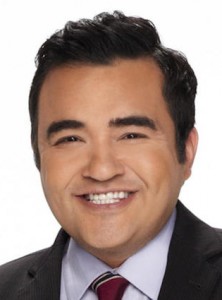 KNBC-4 reporter Mekahlo Medina is taking a three week leave of absence from his TV job. During this time, Mekahlo, elected President of the National Association of Hispanic Journalists (NAHJ) in 2014,  will help run the non-profit organization while it conducts a search for a new executive director.

In an email announcement sent out yesterday, Mekalo notified members Anna López-Buck was “no longer employed by the association.”

Bound by confidentiality of personnel matters, no more details are available about the reasons for severing ties with her after almost 4 years. Anna rejoined the organization on an interim basis in June of 2011 after leaving the executive director position in 2003.

“NAHJ is the strongest it has been in four years. We’ve tripled revenue, doubled membership and now will be focusing on creating the best team to guide NAHJ into the future,” Mekahlo tells Media Moves.

Kevin Olivas, who has been with NAHJ since 2002, first as Educational Programs Manager, later as Parity Project Director and most recently as Recruitment & Guidance Manager, is also leaving the organization. He has accepted another job.

“Not quite ready to announce yet where I am going, but will do so soon,” Kevin says.

“NAHJ is not in turmoil. These are a series of changes not related to financials in any way,” assures Mekahlo.

“Kevin’s departure was only the result of timing. NAHJ will be hiring a third full time staffer to deal with members.”

“Financial Officer Francisco Cortes reported that we are on a growth trajectory for 2015 and beyond. Our current staff has been doing excellent work and these changes simply mean we will be hiring a new executive director and a full-time membership manager to ensure our continued growth and service to our members.”