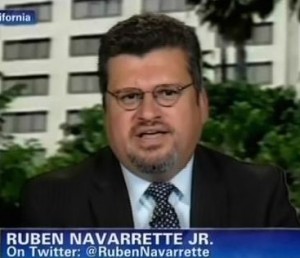 CNN did not renew its contract with syndicated columnist and radio and television commentator Ruben Navarrette. He had been a paid contributor for the cable news network for the past five and a half years.

But that seems to be just fine with Ruben, who is now writing columns for FoxNews.com and will be appearing on various Fox programs.

Ruben says his criticism of how CNN covered “the wrong stories” may have rubbed some network execs the wrong way, as well as asking for a pay raise.

“My CNN columns got a ton of reaction, and I worked hard on them,” says Ruben. “That sort of thing deserves to be fairly compensated. They knew that the new contract was going to be more expensive than the old one, so that may have been a factor as well [for not seeking a contract renewal].

They didn’t fire me, mid-contract. My contract expired. They didn’t renew it. Happens all the time. Contributors come and go, at all networks. And they pop up elsewhere, often at higher salaries. I trust my audience will follow me wherever I go.”

Although Ruben had been under contract since January of 2010, he had been on air at CNN for 20 years.

“I had a really, really long run. I’m extremely grateful to CNN and the great people who work there. Now I’m excited to contribute to Fox News, and perhaps other networks. I’ve been contacted by a few. Latinos will figure prominently into the 2016 Presidential election. And so I imagine, as the most widely read Latino columnist in the country, I’ll be awfully busy and have lots to contribute,” he points out.

“I should make clear that I haven’t been banned from CNN. I can still go on air there whenever I want, and I still get invitations to go on from CNN bookers and producers in New York and Atlanta. But here’s the difference. Previously, while under contract, those appearances were paid. Now, like most appearances by most commentators on most networks, they won’t be. And so that won’t work for me.”

Ruben says he’s relieved that he’s no longer under an exclusivity contract.

“For the six years or so I was under contract at CNN, I was prohibited from going on other broadcast TV networks. During that time, I was often invited to appear on Fox News’ “The O’Reilly Factor” or MSNBC’s “Hardball with Chris Matthews” — shows that I’ve appeared on for many years — and I always had to say “no.” You miss out on a lot of other opportunities. Now I have the freedom to say “yes.”

Besides doing his TV rounds, Ruben will be writing five columns a week — for the Washington Post Writers Group, The Daily Beast, USA Today and FoxNews.COM.

“All while — in my most important job of all — making breakfast for my kids, packing lunches, shuttling them around, going to Little League and volleyball games,” he says. “It’s all good. I’m blessed.”