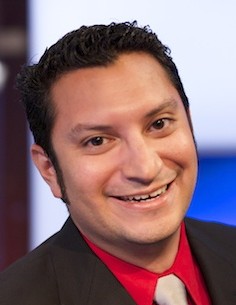 Emmy-Award-winning producer Brandon Benavides is saying goodbye to Washington, D.C., where he has worked the past 5 years.

His last day as Content Producer at NBC News4 is Friday, August 7.

He’ll be moving back to his hometown and starting a new job as Executive Producer of “Good Morning San Antonio,” managing KSAT’s early morning show from 1 to 9 am Monday through Friday.

“My career goal was to live and work at News4 in Washington, D.C.,” says Brandon, who did grad school at American University and interned at NBC’s Washington Bureau for “Dateline.”  After accomplishing that goal, he had his heart set on the next one.

“I’ve never worked in my hometown. I always knew one day I would return home. I didn’t know when. This opportunity at KSAT 12 came up at the right time. I am able to make new career goals and live closer to my parents, brother, sister, niece, nephews and extended family. Everyone is happy about my return home.”

Before joining NBC 4/WRC-TV in March of 2010, he worked at KSTP-TV in Minneapolis/St. Paul, MN as a Senior News Producer for 4 years. He was previously EP for KETK-56 in Tyler, Tx.

Brandon served 4 terms as President of the NAHJ Washington, DC Chapter from 2010-2014.

The D.C. chapter of NAHJ is throwing a goodbye party at the National Press Club on Friday, August 7 from 7 to 9 pm.