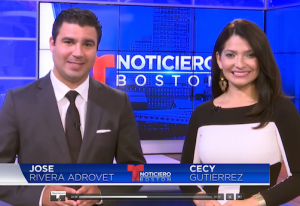 José Rivera Adrovet and Cecy Gutiérrez have been hired as on-air talent for “Noticiero Telemundo Boston,” which will air Monday-Friday at 6 and 11 pm on WNEU.

José, who left WVEA Univision Tampa in July, will anchor both newscasts. Cecy, who for the past 9 years has been a weather producer at WSI (a division of the Weather Company) is on board as weather anchor.

The “Noticiero Telemundo Boston” news team will be housed within the New England Cable Network (necn), a 24-hour regional cable news network owned and operated by NBCUniversal, based in Newton, Massachusetts.

Telemundo announced it would launch the newscasts back in June.