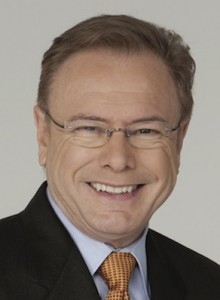 Award-winning journalist Enrique Gratas passed away this afternoon, shortly before 3 pm PT at Providence St. Joseph Medical Center in Burbank, California. He was 70.

Enrique, who until last month was anchoring Estrella TV’s “Cierre de Edicion” national evening newscast, had taken a leave of absence to undergo medical treatment for an undisclosed illness.

A source tells Media Moves he had metastatic cancer.

“We will miss his tireless energy and devotion to the social causes of Latinos in the United States,” Andrés Angulo, Estrella TV’s Vice President of News wrote in a message. “At this time, we have no information regarding funeral arrangements, but as soon as we have the details, we will share it with you.”

During his 40-year journalism career, Enrique covered many high-profile news events, including Patty Hearst’s trial in 1975, a devastating earthquake in Guatemala in 1976, every U.S. president since Richard Nixon, the immigration reform of 1986, the 9/11 terrorist attacks in 2001 and both wars in Iraq.

He began his career in radio in his native Argentina in 1966. He emigrated to the U.S. in 1971 and soon after, would start working in San Francisco at KDTV channel 60 “Tele Sesenta” as the Spanish-language station’s first news director. That station would later become Univision’s KDTV-14.

In 1978, he anchored the first Spanish-language sports program from Los Angeles station KMEX-34. From 1981 to 1985 he was the news director of WXTV, now Univision 41 in New York. In 1985 he became news director and anchor of KVEA-52 in Los Angeles.

Enrique reached nationwide fame when he became anchor of Telemundo’s national news magazine “Ocurrio Así,” a role he held from 1990 to 1999. That year, he moved to Univision, where he helped launch the network’s late night newscast “Última Hora.”

Enrique was among 300 staffers laid off, when Univision reduced 6% of its workforce in early 2009.

He returned to Los Angeles to become host of Estrella TV’s “Cierre de Edición” in 2010.

In a statement, LBI Media CEO Lenard Liberman said: “Enrique’s passing saddens me greatly, as I considered him a good friend and admired his talent as a journalist… He leaves a legacy of journalistic excellence in Spanish-language television, a legacy we will preserve here at Estrella TV.”

After several weeks off the air, Enrique recorded a message that was broadcast on his show on September 22 admitting he was ill and was “going through a very difficult period in his life.” Despite sounding weak, he was optimistic that he would recuperate from his illness.

This story was updated to include additional biographical details and Enrique Gratas’ pre-recorded message.