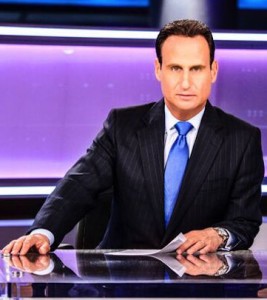 Telemundo network news anchor José Díaz-Balart is gaining additional anchor duties. José, who also hosts “The Rundown” on weekday mornings on MSNBC, will now be part of the anchor rotation for the NBC Nightly News Saturday editions. He’ll also be a panelist on “Meet the Press.”

His first night anchoring NBC’s network newscast will be this Saturday, November 21.

José is the only journalist to simultaneously anchor network newscasts in English and Spanish.

In an email announcement to staff, Telemundo network President Luis Silberwasser points out the opportunity is part of the advantage of working for NBC Universal, which owns NBC, Telemundo and MSNBC networks.

As you know, our network News team has been on a roll this year.  Coming off their best season ever for both “Noticiero Telemundo” and “Al Rojo Vivo con Maria Celeste,” they successfully launched their 2016 elections coverage campaign “#Yo Decido” and are getting ready for a very exciting political year ahead.  In addition, our News talent continue to grow and are increasingly being recognized by their peers and the industry at large.

On that note, I take this opportunity to share with you some news that make us all very proud.  In addition to his double duty as “Noticiero Telemundo” and MSNBC’s “The Rundown with José Diaz-Balart” anchor, starting this coming Saturday, November 21st our very own Jose Diaz-Balart will join the rotation of anchors for Saturday editions of “NBC Nightly News” and become a frequent panelist on “Meet the Press” on the NBC network.  Needless to say, this is a recognition of the great year Jose has had as the first and only journalist to serve as daily news anchor on two national television networks in Spanish and English, and a testimony to what the NBCUniversal properties can achieve when we work together.

Please join me in congratulating Jose and I invite you to tune-in to watch him anchoring this weekend’s newscast of the #1 news organization in the country, another great example of Hispanic America at its best.