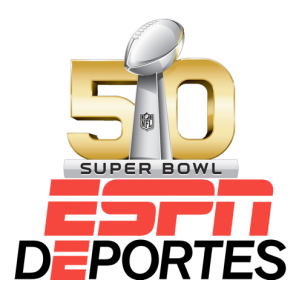 The Super Bowl has moved on to a third Spanish-language sports network for 2016. The game will air on ESPN Deportes for the first time.

ESPN Deportes landed the Spanish-language broadcast rights for Super Bowl 50, which will be televised February 7 at 6 pm ET.

NBC Universo got the rights this year, capitalizing on the broadcast for the launch of the newly rebranded cable network formerly known as mun2.

Fox Deportes was the first network in the U.S. to broadcast the Super Bowl in Spanish, airing the game in 2013 and 2014.

Leading up to the game, the network will present comprehensive, week-long multimedia coverage beginning Monday, Feb. 1. On Super Bowl Sunday, ESPN Deportes will also air a 90-min pregame special at 4:30pm and a postgame show.

Additionally, ESPN Deportes Radio will broadcast the Super Bowl for the third consecutive year as part of a separate agreement with the NFL.