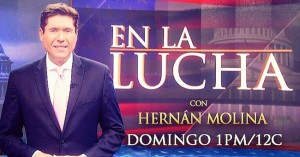 Initial rumors indicated the Liberman Broadcasting-owned network would cancel the show. Instead, management decided to make changes and has said it will continue the program with another host, yet to be named.

“I am very grateful to Estrella TV for affording me such an amazing opportunity to host a national public affairs show, in such a historical context as it is the increasing relevance of Latinos in national politics and the electoral process,” Hernán told Media Moves. “I was also lucky to work with very talented professionals that not only love to do what they do, they are also great human beings. I am ready for the next challenge and continuing my professional development and personal growth.”

According to a source, due to Hernán’s sudden departure, production was halted and there will be no new show taped for this Sunday.