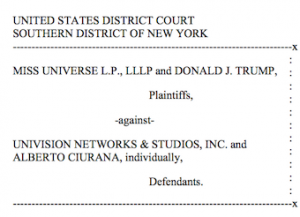 Univision lawyers filed papers asking a judge to dismiss Donald Trump’s lawsuit against the company, calling it “beyond frivolous.”

The motion to dismiss the complaint against Univision and Alberto Ciurana was filed in Manhattan federal court yesterday.

In a lawsuit filed in June, Trump claims Univision breached its contract by canceling the airing of the 2015 Miss Universe pageant and pulling out of the 5-year license agreement the network signed in January.

Trump also alleges the network violated his First Amendment right to free speech and that Ciurana defamed him by posting on his Instagram account side by side photos of him and South Carolina church-shooter Dylann Roof with a caption that read “no comment.”

In the document, Univision attorneys argue Trump “caused Miss Universe to breach first” when he disparaged Mexican immigrants, calling them drug smugglers, criminals and rapists during a presidential campaign speech. In doing so, he destroyed the value of the Miss Universe broadcast rights, because outraged viewers and sponsors wouldn’t “patronize a business connected with Trump,” therefore, excusing Univision from all of its obligations under the Agreement.

Univision attorneys also argue Trump is the one suppressing free speech by barring Univision reporters from covering his events. They claim there’s no basis for Trump seeking $500 million in damages, when in his 2015 filings with the Federal Election Commission he “disclosed that the entire Miss Universe business is worth no more than $50 million.”

Matthew Maron, an attorney for Trump, told the AP that Univision’s attempt to dismiss the suit is “laughable.”

“Univision can try to distract the court and the public from the real issues in dispute all it wants. The fact remains that Univision willfully breached their contract, acted in bad faith and caused my clients to suffer significant damages,” Maron said. “For this, Univision will pay in the end.”