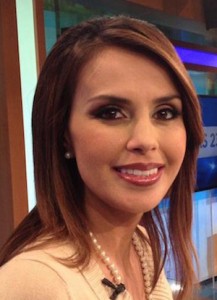 Wendy Cruz has decided to leave her anchor job at KUVN Univision Dallas to become a full time mom to her 2 year-old son. She bid viewers farewell on-air yesterday.

She told viewers that she needed to dedicate time to her son, but would continue to work on independent projects for Univision.

Wendy has been an anchor/reporter at the station since 2007. She was most recently co-anchoring the 5 pm newscast with Ángel Pedrero and reporting for the 10 pm show.

She previously spent 7 years as an anchor/reporter for Teletica Channel 7 in her native Costa Rica.

The station is currently searching for her replacement. In the meantime, KUVN’s 10 pm anchor Ana María Vargas will also co-anchor the 5 pm newscast.

* Original version of this story incorrectly stated Wendy had a daughter.