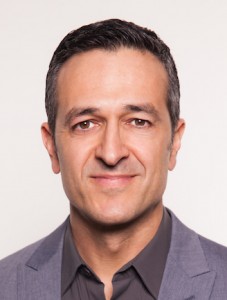 Hernán López, who officially steps down from his role as CEO of Fox International Channels tomorrow after a company reorganization, has announced he’s launching his own media company.

López will continue to be based in Los Angeles. But he won’t focus on video for his new venture. Wondery is a mobile, audio-on-demand network that has financial backing from his longtime employer Fox.

The TV exec is looking to capitalize on the proliferation of smart phones and the almost 50 million Americans who listen to podcasts each month. He says Americans spend about 3.5 hours with audio every day, pointing out that mobile and on-demand are increasingly growing consumption trends.

As part of the launch announcement made yesterday, Wondery will partner with San Francisco-based tech company ART19 to help with distribution infrastructure and advertising of podcasts.

López talked to Media Moves about his departure from Fox, how he came up with the idea for Wondery and his vision for the company’s future.

You have been CEO of Fox International Channels for 5 years. Did you know the consolidation was coming or was it a surprise?

It was not a surprise. What happened is that I’ve wanted to become an entrepreneur for a long time. Especially in the last two years, I’ve taken time to study the intersection of tech and media and became more interested in the space. I was very passionate about finding an opportunity that leveraged the increasing penetration of smartphones around the world.

So I was really curious to find an opportunity in this space. The more I thought about it and explored different ideas… some could be done within Fox, but this one in particular was not something I could do within my current role. So I began to take the steps to become an entrepreneur, which is something I wanted to do for many years. And here we are.

I’m very pleased Fox is investing in the company. It’s a great vote of confidence.

What’s the extent of the Fox investment?

It’s a financial investment. We’re not disclosing numbers. I’m the single investor, personally, although I’m talking to other investors as well.

You’ve been working in a video world for almost 20 years. What made you decide to focus your venture on audio?

Within those two years a lot of that exploration was daydreaming – thinking in planes, car rides, long idle times and weekends, where I kept thinking about things to do within Fox and out of Fox.

Audio is not new to me. My very first job was a radio station in Argentina that also owned a cable network. That first experience was always present in my mind. The second biggest trigger is that I became a listener of podcasts myself.

Like a lot of people, you need a trigger. In my case, was sitting in a car where the audio system is connected automatically to my smartphone and that’s when you start exploring.  You hear someone talk about “Serial” the biggest podcast ever created and from there you go to “This American Life” and all the time you find a world of knowledge and entertainment that is there in the podcast app that a lot of people aren’t even aware it exists.

It’s a huge opportunity both creatively and commercially.

How did you come up with Wondery? How long did you have your project in development?

The name comes from “Factory of Wonder.” I came up with the brand last fall. I wanted a brand name that evokes imagination and speaks to curiosity. I also like single word brands and brands that have the potential to grow. I think Wondery fits all those boxes.

I’ve been working on this particular project for a few months – in my free time and weekends.

What exactly is Wondery, what will offer and how will consumers access it?

It’s an audio on demand network. Other companies similar to Wondery are called podcast networks. We wanted to go with the name audio on demand, because people in the television industry immediately make the association with video on demand.

There are podcasting companies like Panoply, owned by Slate, Gimlet media, a startup founded by Alex Blumberg, formerly of “This American Life,” and Earwolf, now owned by Scripps that aggregated different shows – some produced by them, others by independent podcasters. They aggregate them under a brand and do what a TV network does – cross promote each other and create scale for advertising sales and essentially you turn a collection of shows into a larger proposition – into a brand, if you’re successful.

People will access Wondery through the native podcast app on the iPhone.

One of the reasons why consumption of podcasts is growing is because two years ago Apple introduced the native podcast app on the iPhone’s home screen. It’s preloaded on the iPhone, you can’t delete it. About 30% of all listening happens on the iPhone app.

For people on Android, they can download one of the many podcatchers. And finally, they can go to the website.

We won’t have an app at the beginning. My first goal is to create and curate great shows. It’s all going to be available for free via the apps. (He refers to the iPhone and Android podcatcher apps.)

We’re looking at real life-based shows that combine the element of storytelling with investigation with interviews.

One of the reasons why there isn’t more high quality production of podcasts is because it takes capital to put together a team to create a quality show.

When you look at top podcasts on the Apple store, “Serial,” “Radio Lab,” etc… most tend to be produced by teams of significant numbers of people. Often, they’re also doing show for NPR or WNYC. But there hasn’t been not so much of an ecosystem for these high quality podcasts to be created within a commercial environment and that’s what I’m trying to create.

We’re going to partner with existing podcasts and also hire a development team for Wondery to produce high-quality podcasts.

We will have a content acquisition and development team. We just started. You can say I am now in hiring mode.

What is your short and long term goal?

In the short term, to create a number of podcasts of great quality that people get engaged and appreciate shows they haven’t heard before.

We should have the first shows in late spring or early summer.

My long term goal? I don’t know where this adventure will end. I think it can become a very meaningful business and that’s what I hope to achieve.

I’ve been wanting to do this for over 10 years. I can’t wait to get started.

I’m really proud of my years at Fox. One of the things I’m most proud of is the culture I created here. I worked with several thousand people over 18 years – as I call them, “alumni of FIC.”

Anywhere in the world you go and you see somebody that used to work at FIC, you will feel the same enthusiasm.

I hope I can bring that culture and spirit to my new venture.