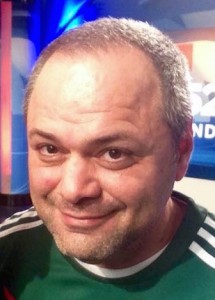 His sudden death has stunned friends and colleagues. He was 47. Pablo died just 3 months after his father, legendary newsman Enrique Gratas succumbed to cancer.

According to a California Highway Patrol report, Pablo lost control of his car, collided into a guardrail, went down an embankment and crashed into a big rig. He suffered fatal injuries and was pronounced dead at the scene.

He is survived by his wife Sandy, his 15-year old son and sister Mariella.

Friends today quickly chipped in to help his family via a crowdfunding effort to assist with the unexpected funeral costs.

Pablo worked at Telemundo’s KVEA 52 for the past 20 years producing, writing and editing daily news promos for the station’s afternoon and evening newscasts, in addition to working on multiple special projects.

“Pablito had a beautiful soul. He was an amazing person and incredible professional,” Telemundo 52 anchor Ana Patricia Candiani shared with Media Moves. “He will be missed.”

Update 1/14/16: A service for Pablo will be held at Our Lady of Perpetual Help on Saturday, January 23rd at 1 pm. The address is 23233 Lyons Avenue, Newhall, CA. His sister requests, if possible, that people wear white clothing or their favorite soccer jerseys in honor of Pablo’s love for soccer.