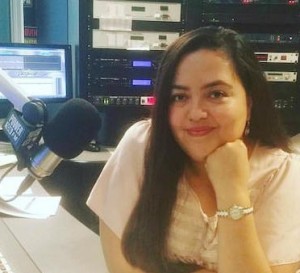 After almost 10 years hosting and producing Sunday morning’s “Knowledge is Power” on Power 106, Wendy Carrillo revealed the station has pulled the plug on her talk show. The last program aired yesterday.

“I’m thankful to Power 106 for offering me the opportunity to produce and host a show that I had 100% editorial control of,” Wendy tells Media Moves. “I’m proud of our content and our unapologetic approach towards issues that impact mostly people of color in Los Angeles and the nation.”

“The show had existed with the station and was on hiatus. I had pitched a demo on what I envisioned it to be, interviews with young people who were involved in the community, who represented the diversity of Los Angeles and who loved hip hop. It was an effort to revamp and create a talk show reflective of our listeners and format.

The one-hour program initially aired live at 7 am, allowing listener call-ins. The show was later revamped to a pre-recorded “news-magazine” format that included shorter interviews, eliminated call-ins, and moved to 6 am.

Wendy, who is the West Coast anchor/producer for reported.ly since December of 2014, plans to look for another opportunity in radio.

“I love radio and the intimacy you feel when its just you and the listeners. I’m going to keep my options open,” she says. “While I’m sad the show has ended, I think the future looks bright. I’m Latina, bilingual, I have a graduate degree in journalism and 10+ years experience in radio and running my own show and I have a unique understanding of an English-language Latino/Urban audience. No media company can say I don’t exist.”