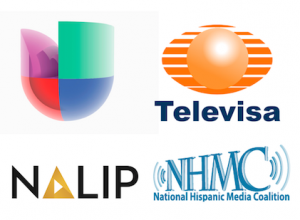 Univision and Televisa, which in December announced an alliance to promote training and provide more opportunities for Latinos in media and new technologies in 2016, today expanded their reach by partnering with National Association of Latino Independent Producers (NALIP) and the National Hispanic Media Coalition (NHMC).

The group today officially kicked off the partnership focused on developing programs that will increase diversity in media and technology.

The programs announced include:

NHMC Television Writers Graduate Program. It will serve as a continuation of NHMC’s original TV writers program. Eight writers that graduate from the program will work on original scripts over a period of four weeks. Participants in NHMC’s original writers program currently work on  ABC, NBC, CW, Disney Jr., Hulu and Netflix shows.

NHMC Writers Database. In partnership with Televisa and Univision, NHMC will expand its efforts to keep track of the more than 130 writers that have completed the program as well as facilitate their contact information and scripts to TV, film executives, talent agents and managers.

Policy Fellowship Program. Fellows from different legal institutions from across the country serve for a semester, learning about media and telecommunications policy issues from a civil rights and public interest perspective. Students will spend a week in DC or Miami observing English language production facilities at Univision.