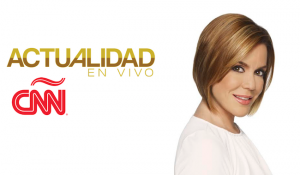 Lucía Navarro, who had anchored the one-hour show since its inception 3 years ago, is now out of a job.

Lucía confirmed she is no longer working for CNNE and expressed gratitude for her time at the network.

“It’s been a pleasure to work with the entire team,” she tells Media Moves. “I’m very satisfied with my work at CNN. I now hope to start a new professional adventure very soon.”

A company spokeswoman confirmed her departure with the following statement: “We thank her for her years of service and wish her the very best in her future endeavors.”

The CNNE rep says the morning lineup will continue with “Café CNN,” the morning show that Lucía previously co-hosted, and at 11 am CNNE will replace “Actualidades” with re-runs of “Encuentro,” hosted by Camilo Egaña, which usually airs at 5 pm ET.

According to sources,  the cable network has said it will add resources to its digital efforts as part of the changes.

Prior to joining CNNE in 2011, Lucía was a freelance correspondent for Univision.

She was previously primetime anchor at Telemundo 52 Los Angeles from 2001 to 2008. Before that, she spent 8 years as anchor and Managing Editor at Telemundo Houston.

Lucía began her career in 1984 in her native Monterrey, Mexico as host of TV Azteca’s morning show “Al Aire.” She also worked as a news anchor and reporter for Televisa in Monterrey, before making her move to the United States in 1993.

3/16/16: This story was updated to include a statement from a CNNE spokesperson and the name of the 11 am show replacement.