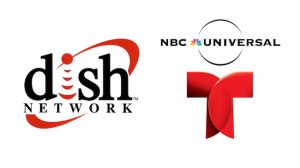 A Telemundo/NBC Universo blackout on DISH potentially scheduled to start this weekend may not happen, after all. That’s because DISH filed a breach-of-contract lawsuit against NBC Universal yesterday.

NBC Universal, in negotiations over retransmission fees for weeks, on Monday launched a public campaign against DISH, urging viewers to call the satcaster to demand to keep the company’s networks on the air. In addition to multiple video commercials, NBC Universal set up a website calling subscribers to “STOP THE DROP!”

According to the DISH lawsuit, contractual agreements prohibit NBCU “from engaging in certain public communications and/or messaging that relate to the expiration of these agreements.”

DISH argues NBCU’s commercials and website messages “cause actual harm to DISH. Among other things, DISH’s subscribers flood DISH’s customer services lines with questions about the NBCU messages, some subscribers cancel their DISH subscriptions, and DISH’s goodwill as a reliable service provider is eroded.”

DISH has stated it will file for binding arbitration to block NBCUniversal from following through with its threat to pull the feeds of all of its networks and broadcast stations.

“Under the conditions imposed by the FCC and Department of Justice in approving the Comcast-NBCUniversal merger, NBC is forbidden from blacking out its networks if a pay-TV provider chooses, in its sole discretion, to exercise its right for binding arbitration. Regulators implemented these conditions to prevent Comcast and NBC from harming consumers and competition.

“In the event of arbitration, affected programming would remain available during that process, and for the foreseeable future.”

In response, NBCU has issued this statement: “Should Dish proceed with arbitration we will of course participate in the process, and look forward to receiving the fair market value for our portfolio of networks.”

Univision has been in a retransmission battle of its own with AT&T Uverse. On March 4, the network went dark on U-verse for 5 days.

The blackout was lifted in a temporary deal to air the Democratic debate. Since then, both companies have extended access to Univision’s signal until March 17 at 1 am while negotiations are ongoing.