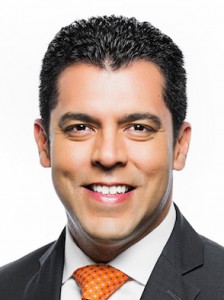 Effective immediately, Carlos Rausseo is Telemundo Denver’s new primetime anchor for the station’s 4:30, 5 and 10 pm weekday newscasts. He had been filling in for anchor Guillermo Martínez since the end of March.

After announcing Carlos’ promotion, KDEN today confirmed Guillermo, who started anchoring “Noticiero Telemundo Denver” in 2014, has left the station, but did not share details about his departure.

Carlos, who joined the station in 2011 as a multimedia journalist, has been KDEN’s weekday sports anchor since 2014.

An Emmy award-winning journalist, Carlos previously worked as a VJ at KCEC Univision Colorado from 2006 to 2011.