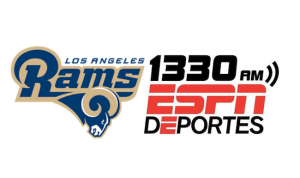 The Rams are making their way back to Los Angeles and they’re hoping to attract the area’s large Hispanic audience.

The deal includes the broadcasts of all preseason, regular season, and postseason games.

The Rams Spanish game day broadcasts will feature six hours of programming, which includes a two-hour pregame show, play-by-play commentary and analysis, and a one hour postgame show.

As part of the Spanish radio agreement, KWKW also will produce and distribute the broadcasts across the Rams Spanish Radio Network.

The Rams Radio Network’s Spanish-language reach will go beyond the L.A. area.

KWKW is also the Spanish radio home to the Lakers, Clippers, Galaxy and the Angels.