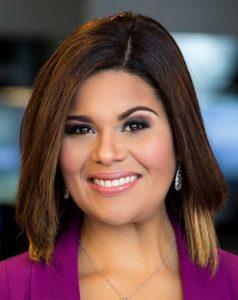 Today is Sarykarmen Rivera’s last day at WVEA Univision Tampa. She leaves the Entravision-owned TV station for a new job in radio with iHeart Media starting next week.

She will be co-host and news producer for new weekday morning show “La Gozadera” on Rumba 106.5 FM.

“I am grateful for the opportunity I had at Entravision and I am humbled by the utmost signs of respect my coworkers and staff here in the Tampa Bay newsroom have shown me when they learned about my decision. This venture with iHeart media allows me to stay connected to the Hispanic community in the Bay area and also allows me to spend more time with my family, as you know I have an 8 month old,” she tells Media Moves.

Sarykarmen joined WVEA as an MMJ in 2014, and was promoted to anchor in April of last year. Months later, when Entravision dismantled Tampa’s news department and started producing a hubbed newscast from Orlando, Sarykarmen stayed on as an MMJ.

In her new job, she’ll share hosting duties with radio personality Alejandro Acevedo, who was most recently an evening host for Entravision’s Salsa 98.1 FM.