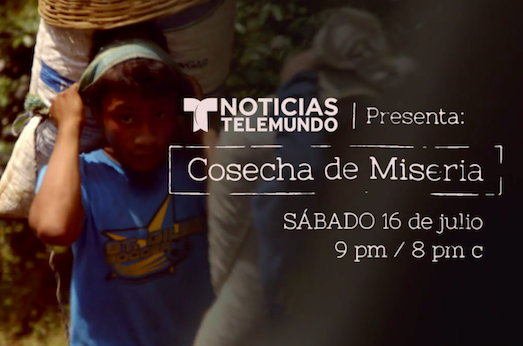 Noticias Telemundo and The Weather Channel have teamed up again to produce a documentary.

The documentary shows the tasks performed by the migrant children who work in coffee production and the role played by regulatory agencies, intermediaries and transnational companies in perpetuating the situation.

“Cosecha de Miseria” debuts this Saturday, July 16, at 9 pm ET and will also be available the same day on NoticiasTelemundo.com, the Telemundo News App and YouTube channel, as well as weather.com.

In 2015, Noticias Telemundo and The Weather Channel won a news and documentary Emmy Award, a George Polk award, and the Investigative Reporters and Editors gold medal for their co-production “Muriendo por Cruzar.”