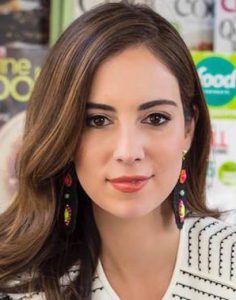 Mariana Atencio is leaving Univision and Fusion to become a Miami-based correspondent at MSNBC. She starts the new job in September.

A memo sent out today by NBC’s SVP of editorial Janelle Rodríguez says Mariana will “split her first few months between New York and Los Angeles before settling down in Miami.”

In her Facebook page, Mariana wrote this about her career move: “I really enjoyed the past 5 years at Univision and Fusion, and a lot of my professional dreams came true alongside you, but it’s time to take on new challenges. I’m forever grateful for the teams that helped me grow and for the amazing stories we got to tell.”

Mariana first joined Univision as a correspondent in 2011 and was an anchor for Fusion when it launched in 2013. Her morning show was revamped and rebranded to “Fusion Live,” but it was eventually canceled in December of 2014.

Here is the full memo announcing her hire:

I’m pleased to announce that Mariana Atencio will join MSNBC as a correspondent beginning in September. She will split her first few months between New York and Los Angeles before settling down in Miami, where she will be based.

Mariana comes to us from Univision and Fusion Networks, where she has worked as an anchor and correspondent. She co-anchored Univision’s 2016 Democratic debate, as well as a Sunday public affairs show for the state of Florida. She has also covered a diverse range of national and international stories such as Latino voters in the 2016 election, the shooting of Michael Brown in Ferguson, protests in Hong Kong, the search for 43 missing students in Mexico, the anniversary of the earthquake in Haiti, and Pope Francis’ election — including a virtual town hall with the Pontiff ahead of his visit to the U.S.

Her investigative and documentary work has received numerous honors, including a Peabody Award, an IRE Award, and a Gracie Award.

Mariana, a native of Venezuela, graduated from the Universidad Católica Andrés Bello in Caracas and earned a master’s degree from Columbia University’s Graduate School of Journalism.

Her distinctive experience and passion for journalism will be a terrific fit with MSNBC’s roster of enterprising reporters, and we can expect to see her contribute across the many broadcasts and platforms of NBC News and MSNBC.

Please join me in welcoming Mariana to MSNBC.