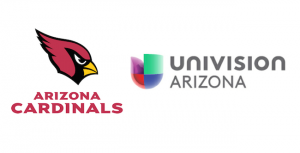 The Arizona Cardinals and Univision Arizona have renewed their partnership for the 2016-2017 NFL season, which also includes Spanish-language radio broadcasts for the full 2016 season.

New for this year, live TV broadcasts of two preseason games will also air on UniMás Arizona in Phoenix on KFPH UniMás 35 and Tucson on KFTU UniMás 25.

Univision Arizona’s sports anchor Felipe Corral and radio personality Edgar Zambrano will broadcast the first two preseason games against the Raiders and Chargers on UniMás with simultaneous radio broadcast on August 12 and 19, respectively.

Analysis and commentary will also be provided during the season by former Cardinals player Ronaldo Cantú and Gabriel Trujillo, the “Official Voice in Spanish of the Arizona Cardinals.”