HuffPost Mexico debuted today featuring on its home page a man dressed up as a Mexican superhero holding a caricature of Donald Trump, mocking the presidential candidate’s trip to Mexico.

The site launched just one day after Trump’s meeting with president Enrique Peña Nieto, sparking outrage in Mexico – something the new online pub was quick to capitalize on. 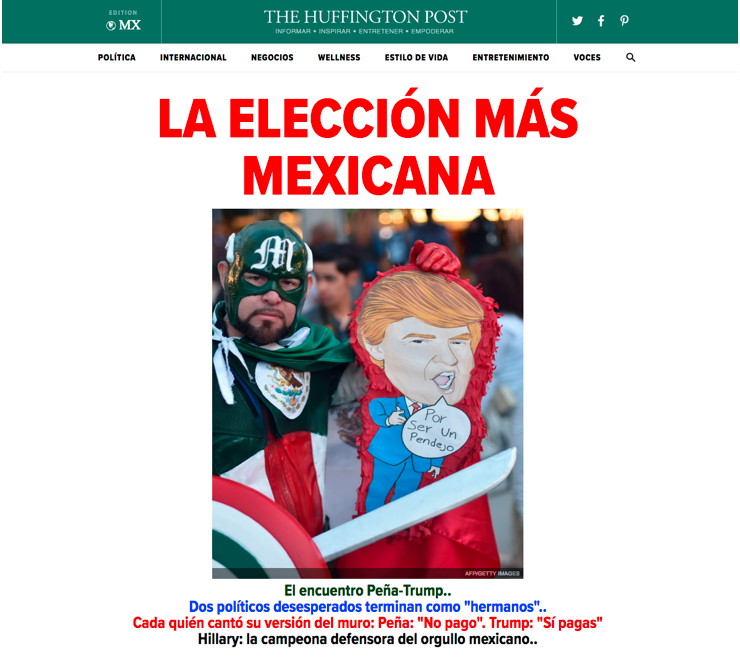 Arianna Huffington was in Mexico City to oversee her last launch as HuffPost’s editor-in-chief, before moving on to launch her new venture Thrive Global.

“There’s no better time than now to bring HuffPost to Mexico. At a time when Donald Trump is running on a platform that includes literally putting up a wall between the U.S. and Mexico, while calling Mexicans killers and rapists, it’s more important than ever to open up the conversation between our two countries, build bridges, and counteract this false and dangerous narrative. Our mission to inform, inspire, entertain and empower — informar, inspirar, entretener y empoderar — couldn’t be more relevant in Mexico right now.”

Laura Manzo is the editor-in-chief of HuffPost Mexico. She was previously the editorial director of Quién magazine and editor of InStyle Mexico.

The unveiling of the new Huffington Post property comes three months after striking a partnership with Grupo Imagen Multimedia to launch HuffPost Mexico.

HuffPost Mexico, whose editors and reporters are based in Mexico City, replaces HuffPost’s U.S. Spanish-language portal Voces, which was shut down in January.