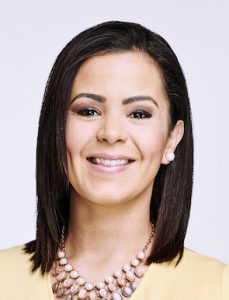 Just one week from the nationwide launch of a Telemundo stations half-hour newscast, Telemundo 62 in Philadelphia announced Iris Delgado will be the anchor of its new 5 pm show.

In addition to anchoring “Noticiero Telemundo 62 a las 5 pm,” she will continue to report for the station’s weekday newscasts at 6 and 11 pm.

Iris was part of the news team that helped to launch WWSI Telemundo 62’s first-ever Spanish-language newscasts in 2013.

Before joining Telemundo 62, Iris worked as a correspondent for Univision’s Primer Impacto and Noticiero Univision from 2012 a 2013. She previously spent two years as a weather anchor, reporter and producer for WVEN Univision Orlando. She began her career as a producer and cohost for public radio station WUFT-FM and as a reporter and producer for WUFT-TV in Gainesville from 2010 to 2011.

Iris made worldwide news in June of this year, when she was physically attacked during a live shot. The video of the incident went viral. Her aggressor pled guilty in July.