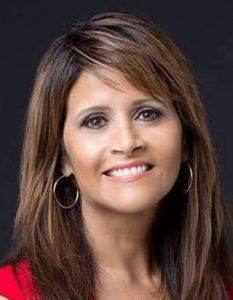 Sylvia Perez is making her TV comeback in Chicago. She’s joining WFLD Fox 32 as weekend anchor and reporter after a three-year absence from TV news.

She starts her new role on Monday, October 3. She’ll be the solo anchor of the station’s Saturday and Sunday editions of “Good Day Chicago” and will file special reports three times a week for the 9 p.m. weeknight newscast.

For the past three years, Sylvia has been running her own production company.

“When I left TV news in 2013, I knew I wasn’t done telling stories. That’s why I started my own production company to produce stories that people would be interested in and really care about. I am so excited to be able to continue to do that now on a larger platform with Fox 32 News,” Sylvia wrote on her blog.

She says the new job is a perfect fit. “What makes this even better is I will continue to do stories for non-profits and my speaking engagements as part of my company, Sylvia Perez Productions. I have worked hard over the past few years to build this company. In fact, my news interview series, ‘Heavy Hitters’ will continue, as well.”

Sylvia previously spent 24 years at the ABC-owned WLS in Chicago, where she was a midday anchor and evening health reporter for most of her tenure there. In 2013, WLS canceled the 11 am newscast she co-anchored since 1992 and didn’t renew her contract.

Prior to joining WLS in 1989, she also worked at KPRC in Houston.