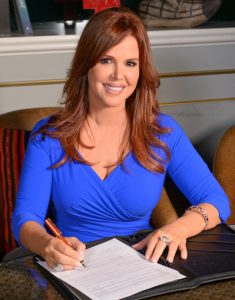 Telemundo announced María Celeste Arrarás has signed a multiyear contract extension, keeping her on board the network exclusively as host and editorial director of “Al Rojo Vivo.”

The network says she will step down as co-anchor of “Noticiero Telemundo” following the presidential elections to focus on her signature show.

The Emmy-award winning journalist had been co-anchoring the national newscast with José Díaz Balart since 2013.

No word yet on wither José will continue anchoring solo or if the network will add a new co-anchor to “Noticiero Telemundo.”

As part of its efforts to reinforce its support of “Al Rojo Vivo” Telemundo today will unveil a new studio for the afternoon news magazine, which will incorporate virtual reality technology, augmented reality, robotic cameras and a cutting-edge LED lighting system.

“Al Rojo Vivo” will celebrate its 15th anniversary on the air in 2017.