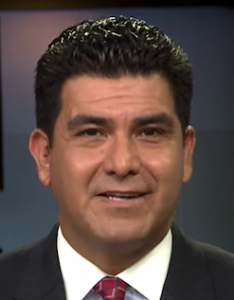 Emmy-award winning journalist Israel Balderas has signed off from WPEC-TV CBS 12 in West Palm Beach, where he had been a weekend anchor and reporter since 2013. His last day was yesterday.

He is leaving the news industry after a 20-year journalism career to become Assistant Professor of Convergence Journalism in the School of Communications and Media at Palm Beach Atlantic University. He starts the new job on January 3.

“Two and a half years ago I became a father and I started thinking – what can I do that involves my passion for news and a free press while also being able to show up at recitals and ball games. So, in 2015 I started teaching as an adjunct journalism professor at Palm Beach Atlantic University,” Israel tells Media Moves.

Israel, who is also a licensed attorney, says that as his contract was coming up for renewal in November, he started interviewing around the country for anchor/reporter positions and realized that while the opportunities were good, they involved working nights and holidays – something he was trying to avoid in order to spend more time with his family.

“I love being a journalist and even after becoming a lawyer, the TV news business had a certain allure. But local news gathering is changing – quantity over quality dominates and the costs are such that stations hire young reporters based on value and not skill.”

He says he also noticed a problem in the incoming crop of journalists.

“I’d often get newbies as the weekend anchor but was quite disappointed by what colleges are teaching them. They have some MMJ skills but they lack the drive of fighting for a free press – too willing to believe PIOs; lacking critical-thinking skills and often preoccupied in the selfie post rather than observing what’s going on around them.

That’s why I’m excited at the opportunity to mentor the next generation of journalist not so much focused on theory but practical know-how. I hope to be that kind of professor that pushes kids to get back to basics while also adapting to changing technology.”

In his first semester as a full-time professor, Israel will teach advanced reporting, journalism for the web and media law, which he says is his “personal favorite.” He will also be an advisor for school newspaper.

He’s also interested in doing “scholarly work on First Amendment issues. I anticipate that in the next four years, a free press that ignores the cacophony of detractors will be sorely needed.